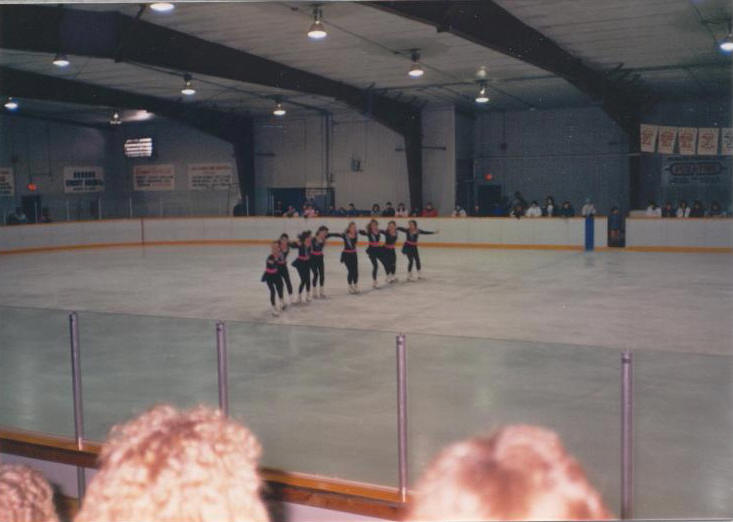 Yesterday, when I should have been studying for upcoming exams, purely by accident, I stumbled upon coverage of the 2010 World Synchronized Figure Skating Championships.

As I explained to my husband the different moves, I realize the changes in the sport since I was a precision skater – now called synchronized skating.

It used to be a sport were parents could expect not to go bankrupt. But the costumes alone looked as though Vera Wang had a hand in the design.

When our first competitive coach came to Arborg, she proposed the idea of starting precision teams – which wasn’t a new concept. Most of the older girls in private lessons were on the Arborg precision team. However, these teams would be competitive – and open to the skaters in CanFigure.

I was part of the oldest team, and we were a mighty team of eight – ranging in age from 12 to 14 – with two sister acts making half the team. Including my sister and me.

To prepare for competition, our coach Joanne had our team guest star at guest shows around the Interlake.

But first – costumes. The younger groups wore all black with gold sequence. However, our team chose to go in a different direction. Looking back at photos, they were definitely memorable.

Rather than a dress, we wore black bodysuits. With a detachable black half-skirt, hot pink cumber belt, silver lapels and – to finish of the ensemble – black leotards and a hot pink bow tie.

It reminded me of my jazz dancing costume – we were only missing the black top hat, tails, and white gloves.

At the time, I loved the outfits. But we competed at our first competition – the 1989 Interlake Precision Competition – we didn’t have team jackets. The judges marked our compulsory elements while we skated in sweaters. Regardless, we won the silver medal. Watching footage of the medal ceremonies, we looked ridiculously out of place as we shivered and stood among the other teams’ elegant skating dresses and warm woollen team jackets.

However, those costumes garnered the local media’s attention. The next week, that skating competition made our local paper, the Interlake Spectator. And on the front page didn’t feature a gold medal team.

The journalist dubbed us “Antics on Ice.” Earlier that week, we skated in the Riverton Ice Show – and we were in the sports section. Plus the 1989 Winter Games. Mind you, all the precision teams were in the photo, however, we were closest to the camera.

Another photo followed with our ice carnival and Winter Ice Revue during the Arborg Winter Carnival with only the CFSA skaters.

We weren’t used to this exposure, and it was awesome.

While the next season didn’t start off on the right foot compared to our first, clearly we were noticed.

Hot pink bow ties and all!