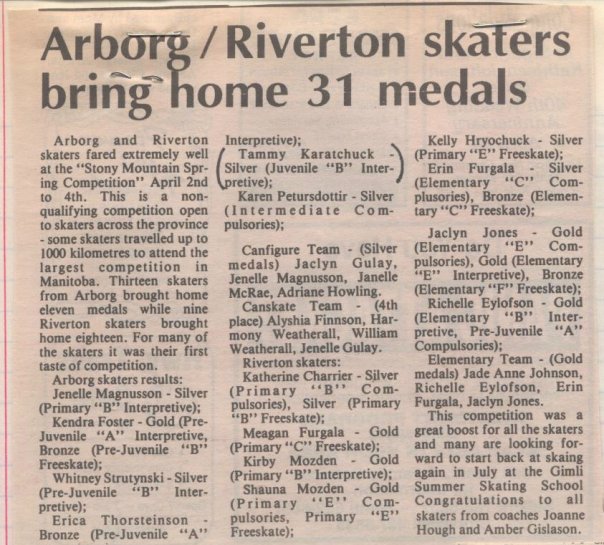 The winds passed like a Chinook over the 1988 Winter Olympics in Calgary.

I started to document their progress – and skaters at the local level. Collecting newspaper clippings from Dodie Wardle’s Youth on Ice to Skate Canada International to the World Figure Skating Championships.

I would skip ahead to the sports section of the Winnipeg Free Press and Interlake Spectator during figure skating season. My love of scissoring out who placed where and in what competition grew. I would spend time painstakingly stapling my precious snippets into a bubblegum pink binder.

The events skaters from my club participated in were highlighted, and when I would appear in the paper, I would note with my name, or simply “That’s Me,” for future generation to know. Some clippings have war-wounds, held together with tape and staples, after saving them from the entrance floor or the ravages of time.

Some may not understand the value of a binder full of tattered pieces of paper with old skating scores from 1993. Or stories about how figure skaters “must cover up,” circa 1989, and or that skaters from “Arborg and Riverton took home 31 medals” in 1993. Or the Nancy Kerrigan story.

But, I do. For one, because it’s been a valuable resource for this blog. And two, it’s nice to look back on memories and past accomplishments.

However, in 1994 when Kurt Browning stepped down from the amateur ranks, so too did my scrapbook. I clipped a few more events, such an Elvis Stojko’s tour. But – for the most part – I stopped clipping world championships and nationals.

I closed the book – so to speak.