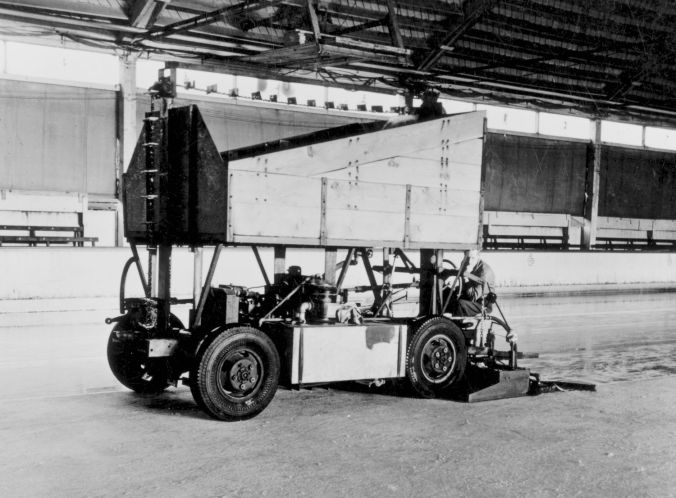 When I was younger, our rink didn’t have an official Zamboni. We had a tractor that dragged an orange, rectangular hot water tank over the ice.  The air was left a little hazy, but none the less, the ice was smooth and shiny.

With our home rinks, my Dad would fill barrels of water and spill them over the ice surface. The water would rush into the deep crevasses my sister and I made in the ice from practicing our jumps and eradicate our spin tracings.

Dad’s job could’ve been easier if he had a contraption like the Arborg club, and cooler yet if he had a Zamboni.

For some reason, my Dad loved to watch the tractor flood the ice. We have footage of the tractor going around the ice. I never understood it, at the time.

When my husband and I were dating, he surprised me with tickets to the Canadian Figure Skating Championships when they were held in Winnipeg for the pairs short program.

Prior to watching Jamie Sale and David Pelletier battle it out with Kristy Sargeant and Kris Wirtz we watched the new crop of talented pairs. After their flight, the ice was resurfaced before the top guns took to the ice.

The Zamboni’s came out, I can’t explain it. There were two Zamboni’s. The drivers were dressed in tuxedos. In all, it took them less than four minutes to flood the ice. A few people actually cheered. It was kind of…cool.

Like Dad, I probably would’ve filmed these guys, too. The unsung heroes of the ice.