It seems some skaters had their ticket pre-punched to the 2014 Sochi Olympics, courtesy of their friendly figure skating federation. Which begs the question: why bother to hold a national championship when the federation has already determined who they want on their Olympic team?

For the sake of ruining mascara and innocent Kleenex, skating federations should consider issuing a press release ahead of time to the scant media in attendance: “The following skaters will be chosen to represent our country at the Olympics, no matter what the outcome of this competition.” 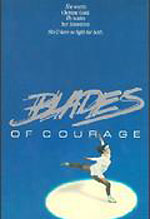 This might sound strange coming from someone whose favourite movie is Blades of Courage, where the bronze medallist is chosen over the silver medallist to go to the World championships. But, that was a movie and I can put the popcorn down.

Why does it seem it’s only in figure skating where there’s unnecessary drama. In downhill skiing, a skier crosses the line first, boom, they are in the Olympics. Last December, at the Roar of the Rings Olympic curling trials in Winnipeg, Manitoba, if they decided to overturn the decision to send Team Jennifer Jones to Sochi, there would have been a riot at Portage and Main. Jones skipped her team to first place and they knew they were Sochi bound that day. They didn’t have to go through an arduous, agonizing waiting period hoping a committee would agree to send them. And in curling, there’s only one spot per country. In figure skating, some countries have multiple spots.

The Figure Skating Federation of Russia can only send one man to the Olympics, and highly unlikely they will send the Russian champion, Maxim Kovtun. It’s all but signed-sealed-and-delivered that Evgeni Plushenko will mosey on into the Iceberg Skating Palace, gyrate at centre ice and be rewarded because he’s Plushenko. If you’ve watched his long program, you’ll know I’m not making up the gyrating.

The USFSA pulled a shocker when they named Ashley Wagner to the Olympic team over Mirai Nagasu. Wagner placed fourth at the nationals in Boston, while Nagasu won the bronze medal. I’m not going to rehash the Wagner-Nagasu affair, because it’s pretty clear where I stand, but if there are three Olympic spots, the bronze-medallist should receive the third spot. Ashley Wagner is one of my favourite skaters, however, she finished fourth.

The decision on who should make the Olympic and World teams should not be made in a boardroom before or after the competition. This makes the national championships look merely like a showcase of stars and lessens the creditability of a once prestigious event.

Skate Canada chose to send the podium finishers this year to Sochi, however, this hasn’t always been the case. In 1998, Skate Canada, then known as the Canadian Figure Skating Association, refused to send Emanuel Sandhu to the Olympics in Nagano, Japan, even though he placed second. In 1984, the CFSA sent the Jaimee Eggleton, Canadian Junior men’s champion, to the Sarajevo Olympics over Gordon Forbes. Forbes won the Senior men’s bronze medal.

I’m not hanging skating federations out to dry; I just believe they need to understand why some people are disenchanted with figure skating. To an outsider, our sport has a complicated judging system, low audience attendance, high-training costs, and receives little media attention.

To make it onto the podium is hard enough. But to have a skating federation turn to another skater and say “We want you instead,” is a slap in the face.

I predict if federations don’t change how they pick their Olympic teams – they soon won’t have a pool of skaters to pick from.