If Jessica Sergeant ever dreamed about skating on an ocean, she’s reached it.

Sergeant’s coach, Angela Duffy, said they discussed her future in the sport after the 2013/2014 season ended. The idea of skating on a cruise ship came up, at that point though, Sergeant “flat out turned that down” Duffy said.

However, that quickly changed.

Fast forward a couple weeks when Sergeant received a message on Facebook. Little did she know at the Canadian Tire National Skating Championships in January, she had been scouted for an opportunity to skate in the ice show that sails through Bermuda, Haiti and San Juan.

“…he had seen me at nationals and said he would love for me to join if I was interested,” Sergeant stated in an email interview as she travelled to Puerto Rico.

“I was quite excited … I finally decided to retire from competing and continue working on getting certified to coach.”

When Duffy found out about the message she was “very excited” for her student.

“They found her, which is quite flattering,” said Duffy in a telephone interview.

Soon after, Sergeant was offered a contract and a month later she “was on the ship.”

“[It was a] quick process. [It’s] still sinking in that I am here,” stated Sergeant.

“I thought this would be a great opportunity to travel and still do something I have a huge passion for,” stated Sergeant. “The bonus is I am getting paid for it.”

Sergeant’s life is quite different from her daily training routine at the Extreme Edge Skating Club in Edmonton, Alberta. After she wakes up and eats breakfast, the cast works and skates with the guests. Then, the skaters assist with spotlights or costumes for dance shows.

The rink is different as well – the ice is only an inch-and-a-half thick.

“We have a Zamboni but it’s about a fourth of the size. The rink is 40-feet by 60-feet,” Sergeant stated.

On performance days, Sergeant has a half-hour warm up before the two-hour ice show with an hour free between shows.

“The studio can fit about 200 people. [The] lighting is amazing here,” Sergeant stated. “The show is a lot of fun to skate, our cast of ten is amazing!” 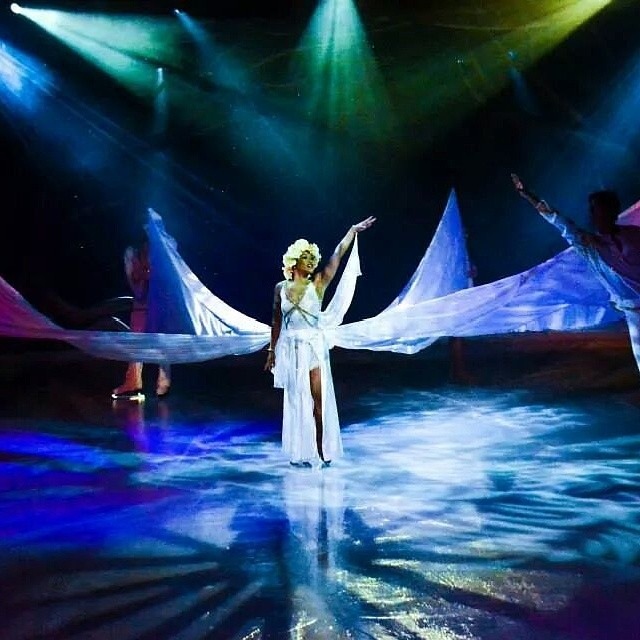 Back on land, Extreme Edge is pleased there’s another avenue for skaters to travel down after their competitive careers .

Although Sergeant admits she misses her family and friends, and “especially my boyfriend,”

Plus, not many get to skate on a frozen pond in the middle of the ocean.