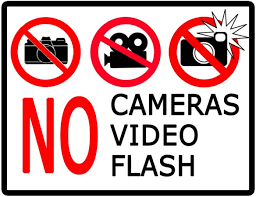 It was the 1990 Arborg Skating Club competition.

While skating to Rick Springfield’s “Don’t Walk Away,” a skater – who was pegged to win the gold medal – threw herself into an Axel. However, at close range, someone flashed the skater in the face with a camera. She tumbled to the ice after losing consciousness mid-air.

Skaters, parents, and her coach watched from the boards in horror. The audience was silent. We thought, “She’ll get up. She always does. Right?”

No. In fact, she didn’t move. Our coach, Joanne, ran out to her. The skater came around and I numbly watched as my sister was assisted off the ice.

I cried when she withdrew from the competition, and I was ready to hunt down the people who shot the camera – but someone beat me to it.

A camera flash is a camera flash. Your 2016 flash isn’t kinder, softer, gentler than a flash from 1990. It’s like saying your cat doesn’t shed. It’s a cat. It sheds.

It’s a flash. It blinds people. And it has no place in a well-lit arena during a skating competition.

But we see people flashing skaters at all levels, intentional or not. From regionals to the Olympics, the crowd glitters like a strobe light.

I understand. You want photos. Competitions and ice shows are special, and you want to document them. But not with an flash camera akin to an x-ray machine. Especially when skaters are in close range.

Turn off the flash. No exceptions. Parents. Relatives. Friends. Media. If a skater is preparing to perform or in mid-program, keep your flash off the ice.

Skaters are spinning at high speeds. Entering jumps with extreme concentration. The last thing they need is someone capturing the moment they’re thrown for a loop.

Worse is Smartphone video with an enabled flash. Disable the flash. You’re at a skating competition. Save the iPhone light ode for a Taylor Swift concert.

When I was the P.A. announcer at the 2015 Interlake Regionals, barely two minutes after I stated the flash photography warning – someone whipped out their iPhone. A light sabre beamed onto the ice during the warm up. I clicked the mic back on and repeated the reminder, staring the person down – who slipped the phone back into their pocket.

Please keep the skaters’ safety in mind, and please turn off your flash.

And remember that 15-year-old girl who lost consciousness because someone didn’t turn off their flash.

Because her sister will never forget that moment.