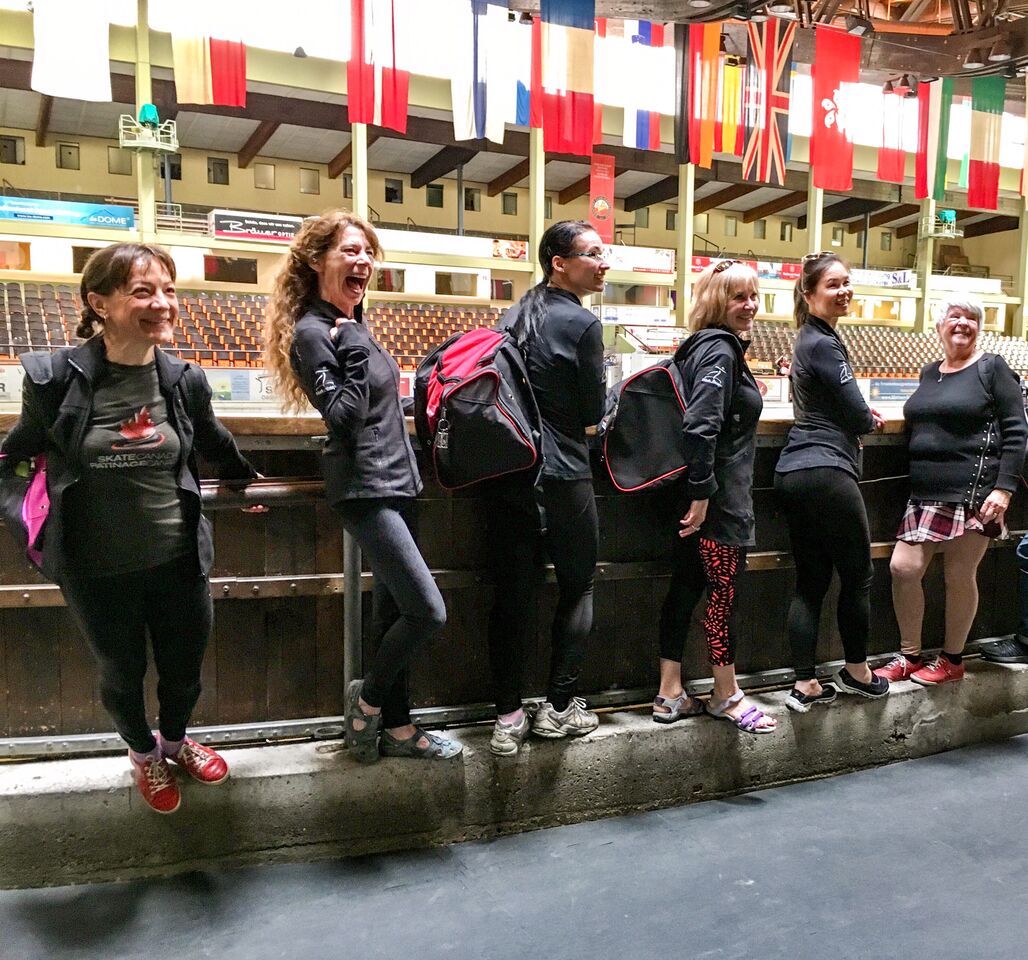 If you want to spark some motivation, watching  To The Worlds on CBC Docs POV is your first step.

To The Worlds follows six women from the Winfield Skating Club near Kelowna, BC as they prepare for the prestigious ISU Adult World Figure Skating Competition in Oberstdorf, Germany. Actually, there were seven skaters …

These woman, ages 46 to 77, are driven to succeed in sport and life, which will resonate with many. It’s about divorce, pleasing parents, loss of a spouse, and overcoming obstacles.
For example, Henrietta Penney – age 77 – overcame challenges and received a Masters at the age of 52. She’s a pure character on – and off – the ice.

Or Donna Bergvinson and her cute “Brag Book” with a photo of one of her idols. Then, she’s crying, talking about her reasons for skating.

It’s that mix of emotion and humour that makes To The Worlds relatable.

Another scene reveals more of their personalities, when some of the skaters were searching for costumes. They found value in the most unlikely places.

However, this documentary is an icy roller coaster ride, so don’t expect sparkles throughout.

These woman had six months to prepare for Oberstdorf. As the worlds approach, the toe picks come out. Personalities changes. The skaters are more determined. More intense. Except for the seemingly, calm 46-year-old Karen Smith, who can land her double Salchow.

Then, one skater’s family life implodes three days before she leaves for Oberstdorf. Does she stay, does she go? But she realizes, no risk, no reward.

The cinematography is stunning, shot against the mountainous backdrop of Winfield, BC and Oberstdorf, Germany. However, there’s only shot of Kelowna – and it’s very short. Not to sound like Lori Laroche from Blades of Courage, but “Just a few beats longer … that’s all I need is just a few beats.”
The scenes of Oberstdorf make up for Kelowna. Gondolas, wide shots of the exterior of the hotel, inside and outside the arena. The rolling grass hills against the mountains. It’s The Sound of Music, Oberstdorf-style.

The camera work by Chelsey McEvoy, James Tocher, and Ryan Tebutt didn’t miss a beat of To The Worlds. Camera angles reflected upsetting and uplifting moments. At Oberstdorf, they caught awkward angles, expressions, close up reactions – a difficult feat with nearly 600 competitors, plus coaches, family, etc.

Lighting also plays a role during several scenes to enhance the mood, such as when a skater returns after an accident. It’s well thought out.

The writing by Ord and Helen Slinger are commendable. The narration of the documentary are true to each scene. Happy story, happy scene. Sad story, sad scene. Dramatic story, dramatic scene.

The power of a visual is shown when one skater speaks off camera about the loneliness of the sport while she’s seen on-ice without anyone in the stands. In another scene, plexieglass acts as a jail-like setting when Wendy is defied by another skater.

In Oberstdorf, there’s an emotional moment when Maureen Barnes skates. Recently widowed, Barnes speaks as she’s seen performing her artistic free skate. All of the adult Winfield skaters are cheering her on from the kiss and cry, and Barnes says something about her late husband that’s so profound, Kleenex probably saw an increase January 18th, when this documentary was released.

While the skaters couldn’t play their actual program music, Timothy McCauley provided a delightful score of original music for this documentary. Bergvinson’s free skate music, “I Believe” by Nikki Yanofsky, was replaced with an upbeat theme. Each skaters’ program tone was reflected in the score.
To The Worlds is about coming to terms with life and aging. That some times things are out of your control, and you have to come to terms with that.

We need to understand age doesn’t define what you can and cannot do. Time is passing everyone, but you don’t have to let time pass without filling in those moments.

And To The Worlds teaches us to make each moment count.